I’m señor Ruby developer / hacker and I build startups for a living. In the beginning of October 2014, I traveled from Ljubljana, Slovenia to United Kingdom to work with amazing guys from my client MUBI. I stayed in UK whole October, during this time - mostly on weekends - I’ve build several things,… This is what I’ve build, how, and why.

It all started with this simple project - politiki.si. On my spammy Facebook feed I’ve seen picture of how it is possible to generate political “bullshit” from four groups of different sentences. I contacted my friend @xzarex - who is mobile, web and UI/UX designer. I have pitched simple idea to him just to validate if its funny enough. And we just built the thing. He made design, and I’ve made the rest. 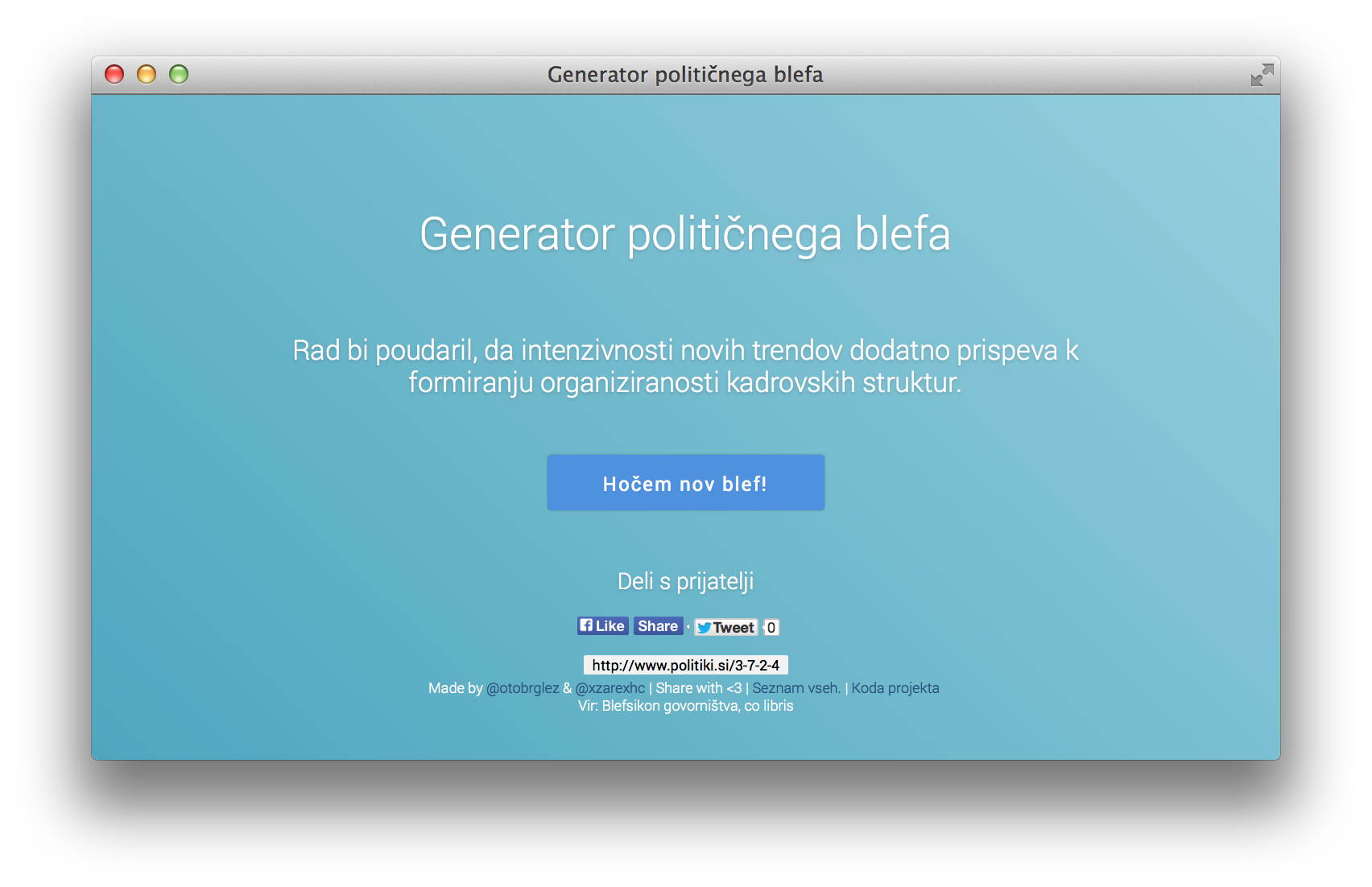 Thing was build in ~4 hours and the rest is history. Got 2817 page views and 2413 first week when it was a bit “viral” on Facebook and Twitter. Result was simple little joke, and it was successful in that point.

Second project on my list is Aloo. Aloo is simple Ruby and Rails web application that collect KPIs from your business and then aggregates them on the fly. Application provides dashboard with nice visualization and ultra simple API. I’ve build this thing in ~35 hours as my submission for RailsRubmle 2014. 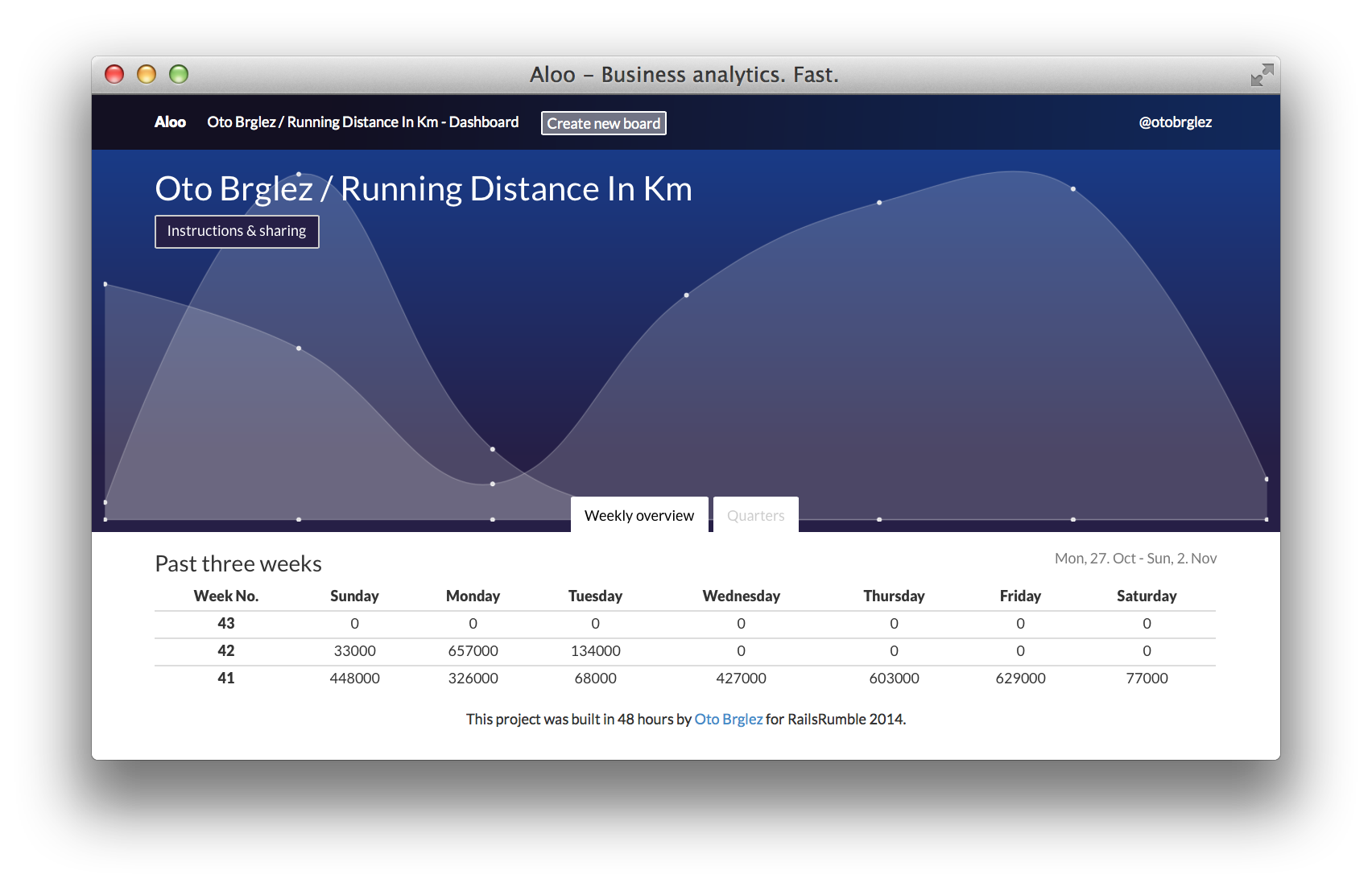 Sadly, idea was a bit too complex and a bit to specific to give me some exposure on RailsRumble. I got some nice comments and few people actually pushed their data to it. I’m describing Aloo a bit more in my other post. I still think its a nice product and I’m happy with how it turned out.

On October 24th I participated on Startup Weekend FinTech London, this is event where bunch of smart and passionate guys put their heads together and they build something that “might” be an actual startup by the end of weekend. I was in team with two business guys - @nicoarrellaga and @LarsMarkull. During the weekend we build prototype for HumanLoan. On Friday we talked about the idea over a beer in classical English pub, on Saturday, I started wireframing / designing and actually coding. Guys were digging and poking over business and doing research. Sunday was all about polishing the product, slides and making sure that judges will get it,… 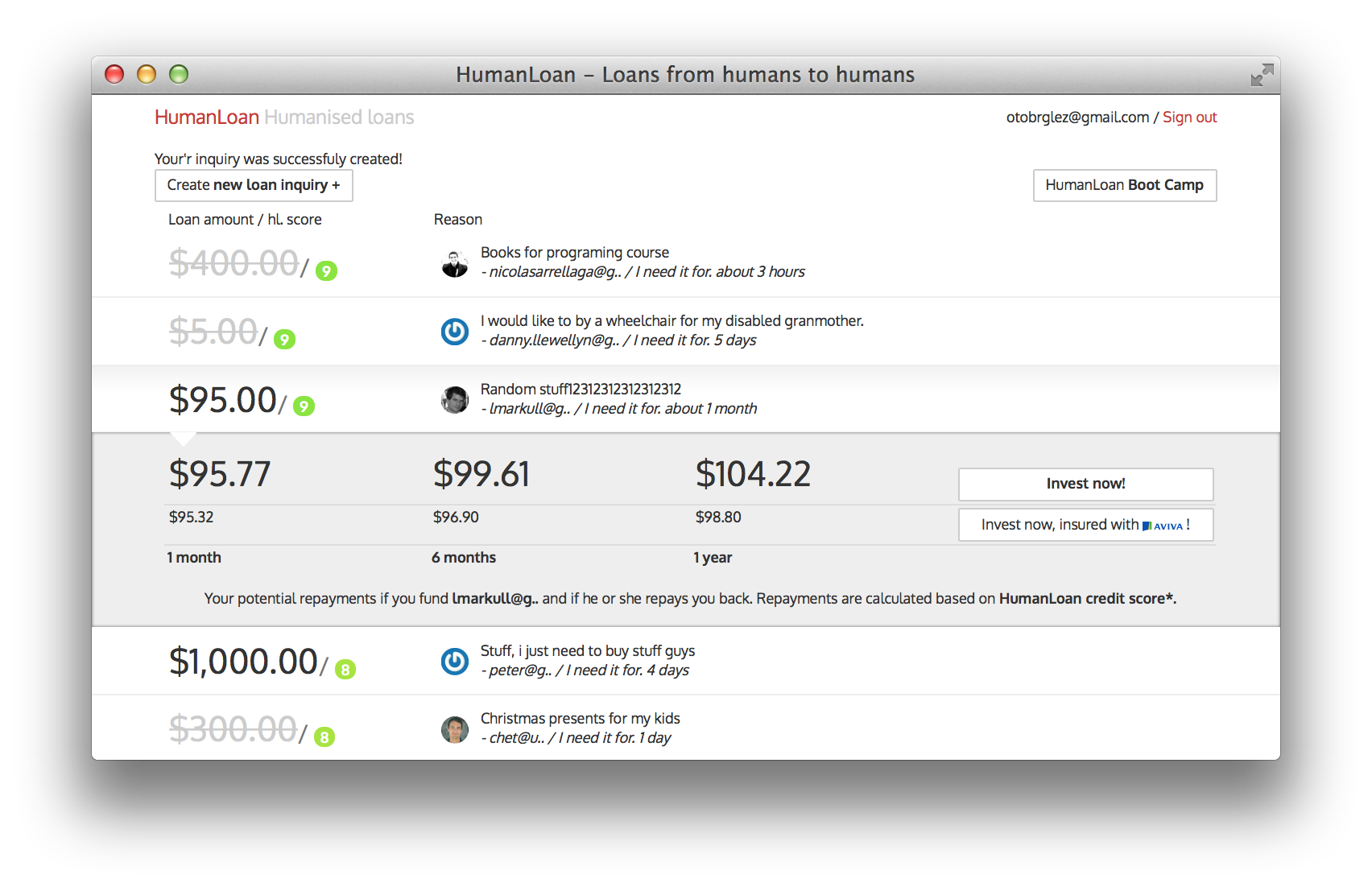 Sadly judges, didn’t see and/or understand our vision of how peer-to-peer humanized loans with custom algorithmically powered credit score could be a future of modern finance. Currently the product is prototype and we got some interesting feedback from VCs, bankers and other people from #FINTech industry. But that is about it,…

We got to know each other quite well, and I strongly believe that networking is important if not the most important thing in events like this,… Thanks guys! 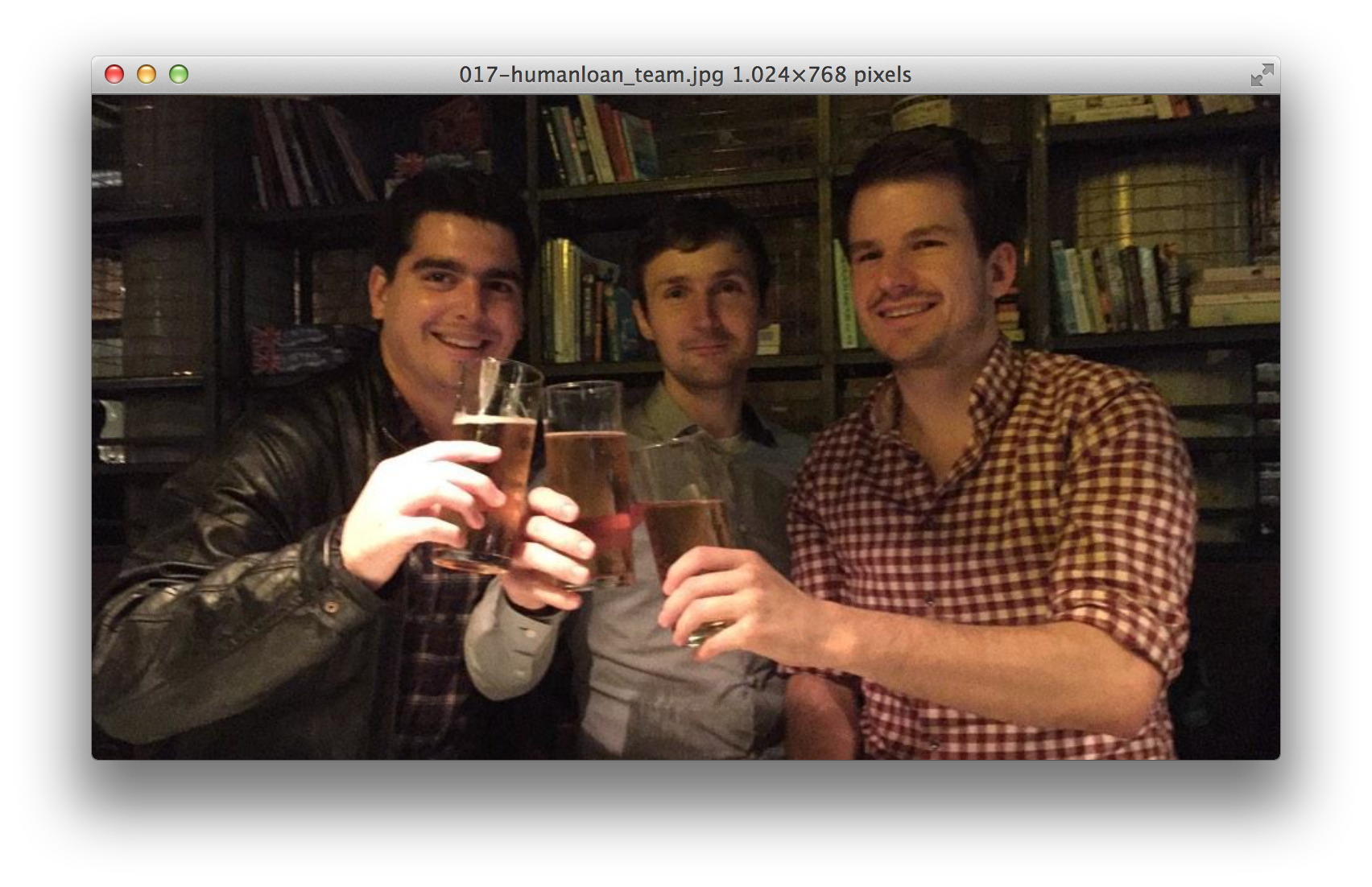 Last product of this month was updating page for my business - opalab.com. I wanted something simple, clean, lean and would give visitors some general idea what was my business all about. I wanted to give people impression that I take my business personally and I get it as a way of life. I split the site onto two parts. Recent biggest projects and examples of what I hack on in my spare time. 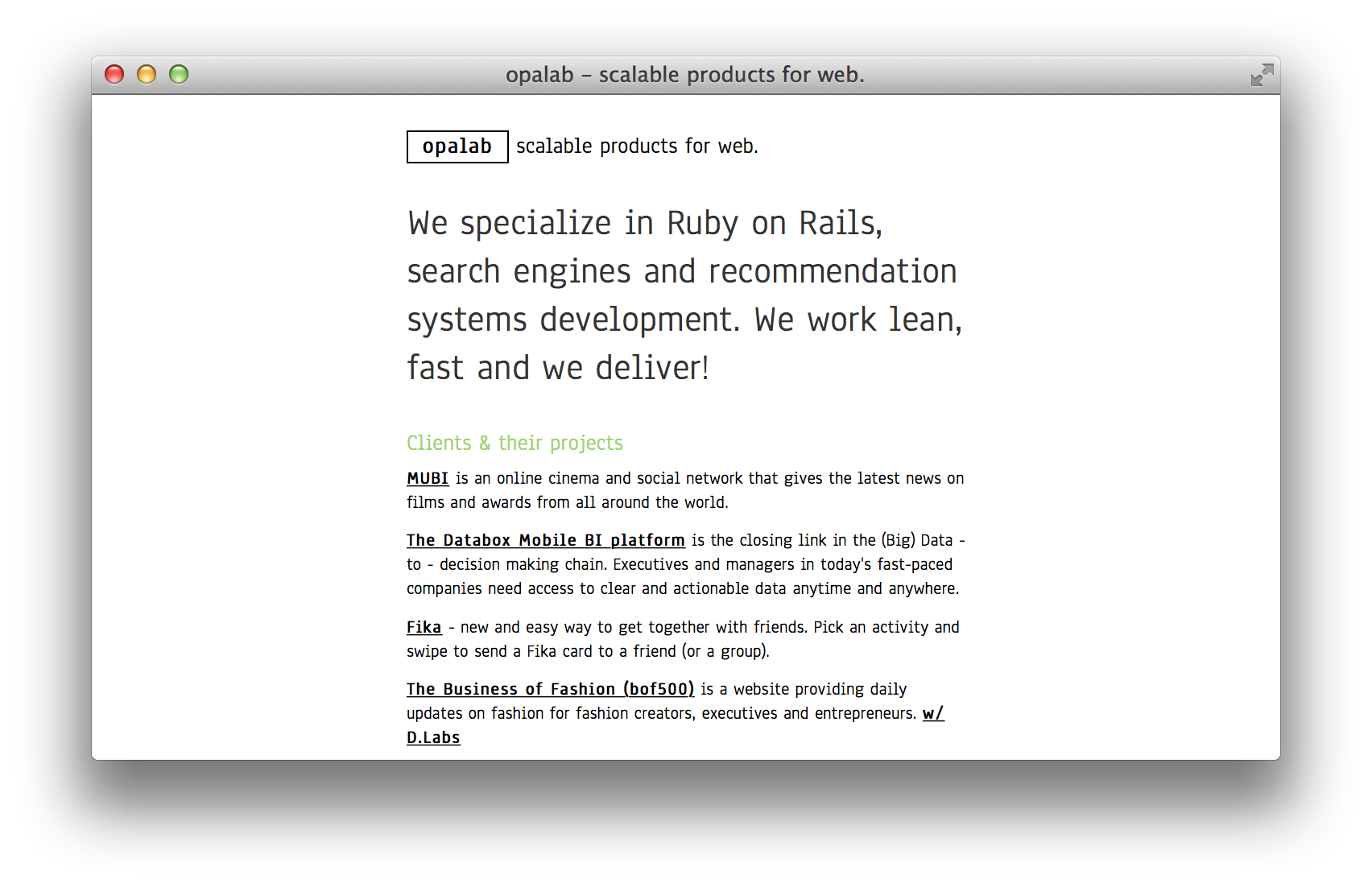 I’ve asked Reddit /r/ design_critiques for some critique but most of improvements were suggested by my friend @dejanstokanic. I hope that the page gets idea to the people. Well.. Only time will tell. :)

This is a general summary of all projects and time spent.

All of projects were fun. I learned few things that I didn’t know before, I meet few really incredible people. And that is why I did it. ;) And how was your October?