While browsing through the unlimited supply of sh** posts on Facebook, I’ve stumbled upon an exciting invite to an “environmental hackathon” - named “Living with environmental changes / Življenje s podnebnimi spremembami” (event).

Online hackathon organised by a private company - Transformation Lighthouse - with collaboration with Slovenian Environment Agency - ARSO and Ministry of the Environment and Spatial Planning [MOP], plus few initiatives like Open Data Slovenia OPSI and business partners like Microsoft Slovenia, Oracle Slovenia and others.

At this point, you’re very likely already snoozed. 😴 And that is completely fine; so was I when I first read about the event.

It got me thinking, though,… Why would someone like to speed 48 hours working for the “government” during the weekend and lose a lot of sleep? 🤔 Well; my rationale is simple. By joining the event, I’ll get a rare glimpse into how government agencies - that usually sit on tons of incredibly valuable data - think about product development, the resources, data and insights that they can get out of it. It is the perfect environment to get the data about the environment - at the source (yeah I know I could just build my own weather station instead 🌤 ). In my current seek for interesting big-data and real-time data; could be the perfect quest.

The day before the event I started browsing through all the available material that the organisers have compiled together while also looking for anything that is or could be turned into an API or data feed on all of the government sites. I found this lovely golden nugget on one of the pages. 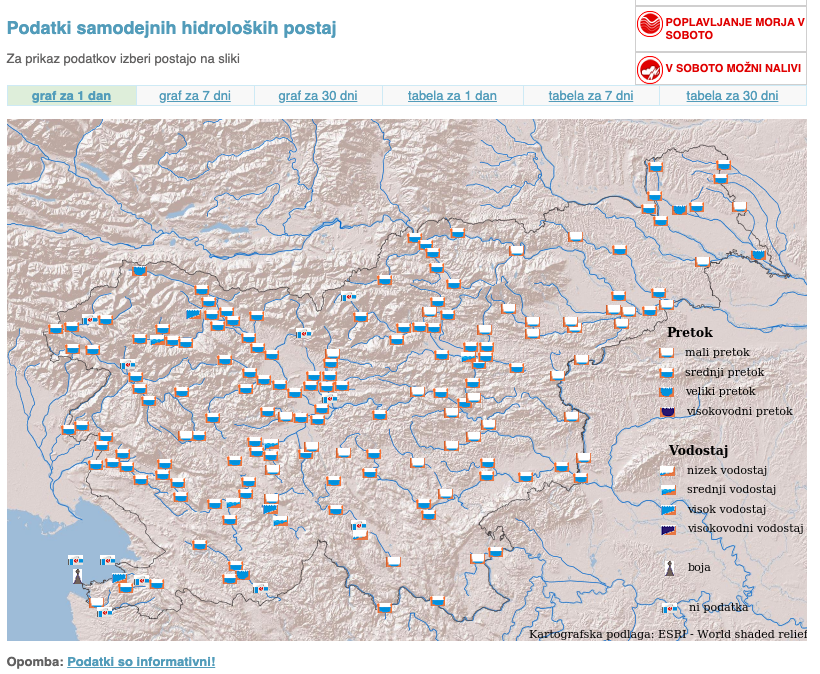 It is a “widget” that shows water levels and the flow of water in the country. You can see “buckets” that simulate if the flow is low, medium, or high. And after some more browsing, I found out that this data is available in XML format, and after that, I also found out that there is also historical data, in some cases 30+ years back.

And that got me thinking. What if I extract this “current” data and merge it with “historical” data; would then - in theory - be possible to predict the future with some degree of certainty? And that’s the idea. Bingo!💡 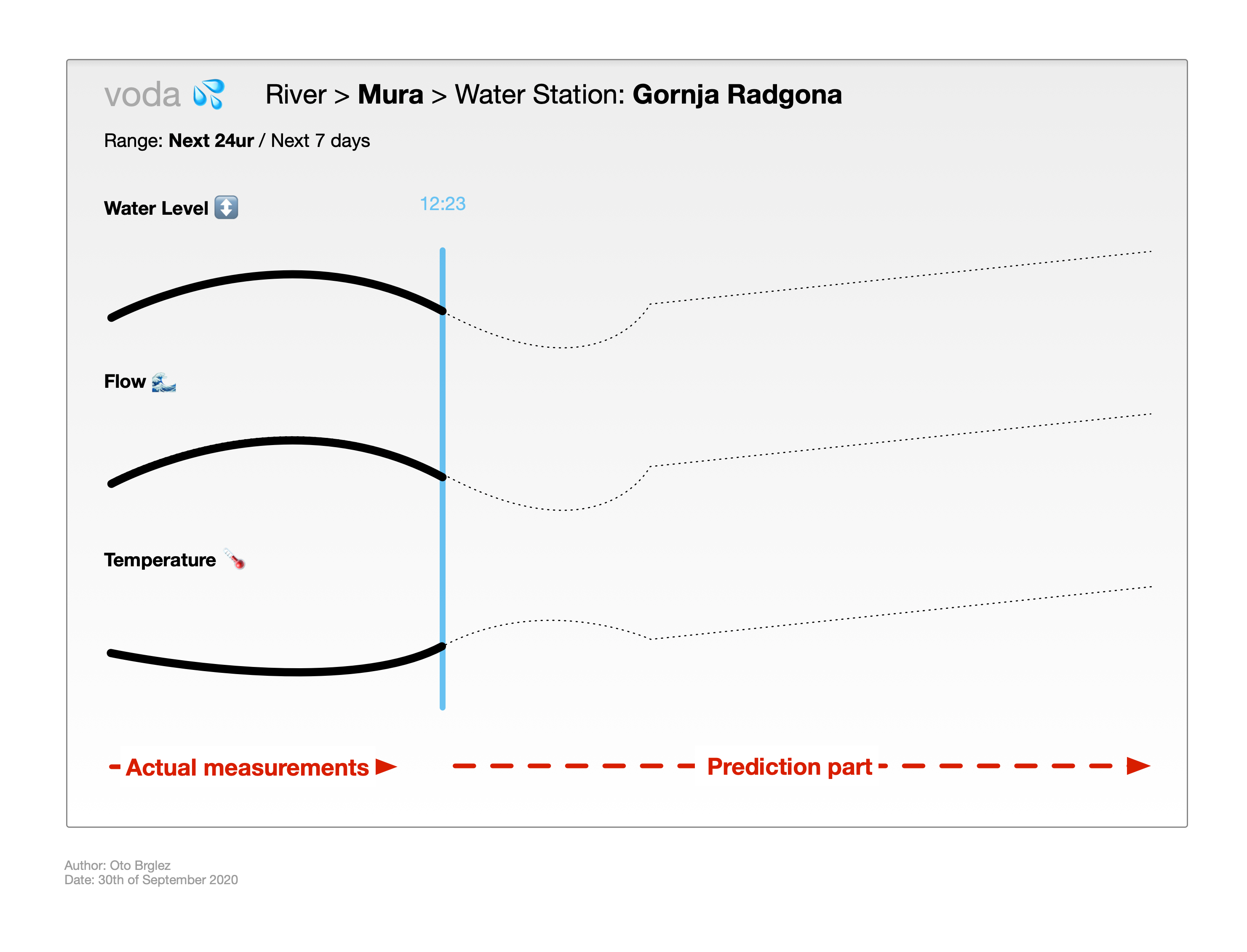 The following morning; the event took off. It was a traditional intro/marketing/ideas/make-world-a-better-place combo. The organisers and the agencies expressed their fields where they think the attendees could chip in. And provided a beneficial set of experts from various fields,…

We were given the following three subjects to chose from

I’ve chosen the 2nd one - as I thought that the idea of understanding the water sources might somehow fit into that.

Problem numer one. With a bit of bad luck, I was put in a team where nobody showed up. Oops. 😅 I thought that this might ruin part of the fun but on second thought… 💡 If I work alone, I can move faster,… and I can focus on the core of my exploration. How to get the data, quickly and how to get to insight asap?

I spoke with organisers and asked them if it would be possible to work alone. To my surprise, they agreed, and I was ready. 🚀

The proof of concept

My idea was conceptually simple. Fetch the water data from government sites as quickly as possible, few requests per second with excellent parallelism… and turn that data into time-series. Make everything except the collection part “real-time”. And for the second part - archive - also use similar piping to fetch and process the historical data,… and hopefully, also ingest that into time-series or some other format.

My original idea was to scrape with Akka, and emit JSON to two separate Apache Kafka topics and then combine these two topics with ksqlDB query. After that, send the results of the streaming question to InfluxDB and visualise everything in Grafana of Grafana/ElasticSearch combo.

But then,… Like all great ideas. It evolved. Since one of the organisers of the event was Microsoft, I thought that I might look into Microsoft’s offering on Azure. So, what is managed alternative for Kafka / ksqlDB / InfluxDB on Azure?

Let’s ask the expert in the house. 💡

After a beautiful and insightful session with one of Microsoft’s Senior Cloud Architects, I got all the answers that I needed for this part. I just replaced the original components with Azure’s similar offering. And this is the result. 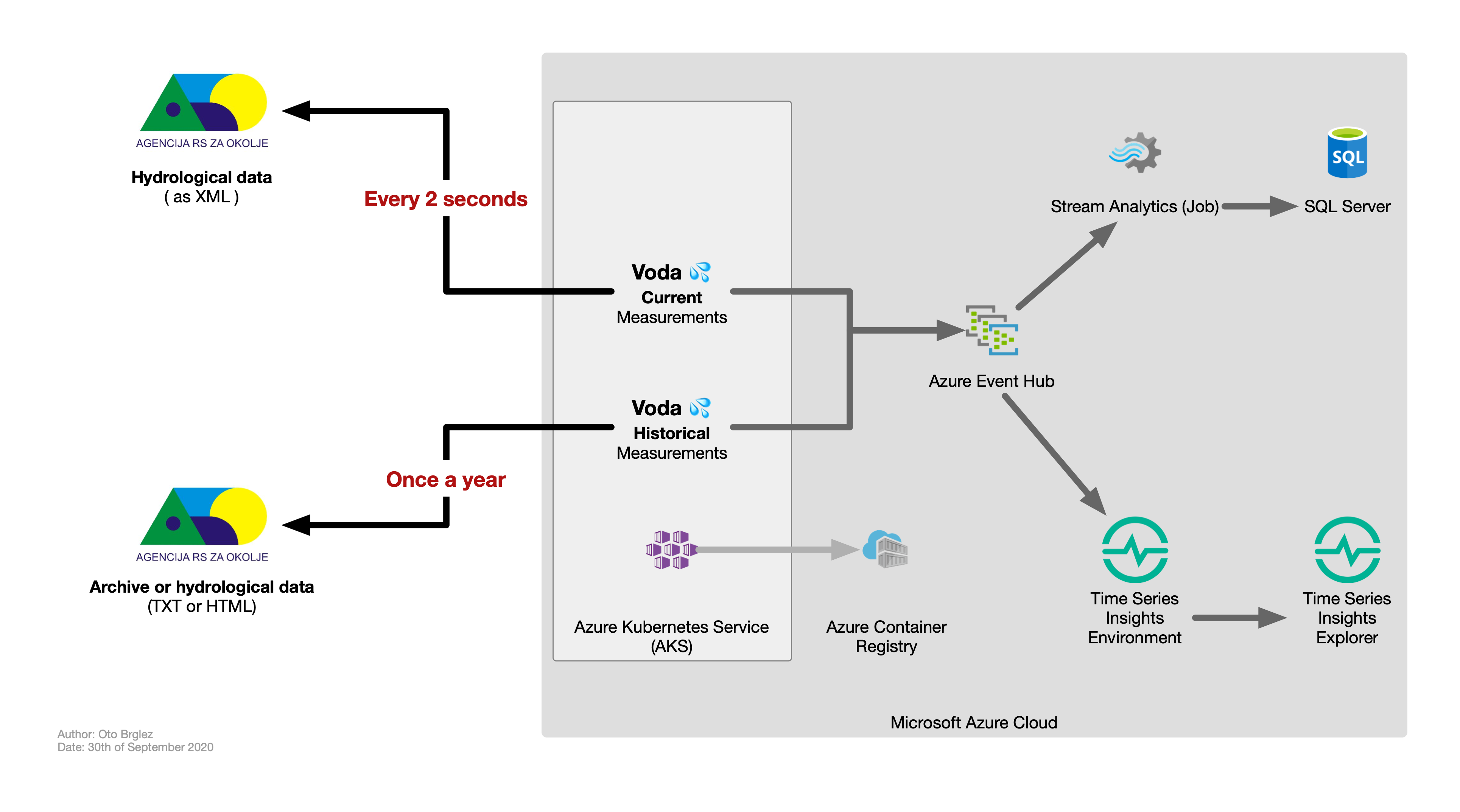 For those curious; what is used.

Conceptually the application is split into two components; one long-running process that fetches water data every 5 seconds, transforms XML and pushes that into Azure Event Hub and another that is manually triggered - per demand - and fetches the whole archive in CSV and again pushes to the hub.

Let’s look in the core or main one first,… First attempt at the collection,…

We can make our collection a bit more resilient by wrapping the collection flow with RestartFlow.onFailuresWithBackoff. By doing this; we now made sure that if targeted service is down, our app will back-off, wait a bit and retry. If that fails 10 times; the whole app will come to a stop and terminate. Then ultimately - in our case - be restarted by Kubernetes.

And the second enhancement, since we use Akka Streams and Azure Hubs here, is to bulk these measurements together and emit them in batches. This can easily be achieved with the introduction of groupedWithin.

And since we don’t want to rely on the timestamp of the original data; we also override the “date”, with the date that the measurement was actually pushed to the hub with simple “copy”, like so

Collection of the archive data

The central part is very similar to the first application; just without the Source.tick.

Since there is way more requests here that are emitted to fetch the data for every station for every year for last 20 years; throttling is introduced.

Oh; and the Azure Event Hub producers look like this

The two apps were bundled together into one application, and packeged together into Docker Image with help of sbt-native-packager. The Docker image was then pushed to Azure Container Registry (ACR).

Some Bash used for deployment,…

The thing is now deployed to Kubernetes,… … and collection runs smoothly. Win! 🏆

Day 2. Wrap-up, finish and the results

After all the magical things were disigned, put together, deployed and once I’ve explored and configured everything that is sketched above… It was the second and final day of the hackathon. On this day I focused myself into wrapping up what I’ve started. I’ve polished the code a bit, made few changes here and there and made sure that collection and visualisation was working as expected.

I give you a lovely real-time chart. On the left side you’ll see three measurement stations that are located on river Ljubljanica. Each of these stations measures temperature, flow and watter level. 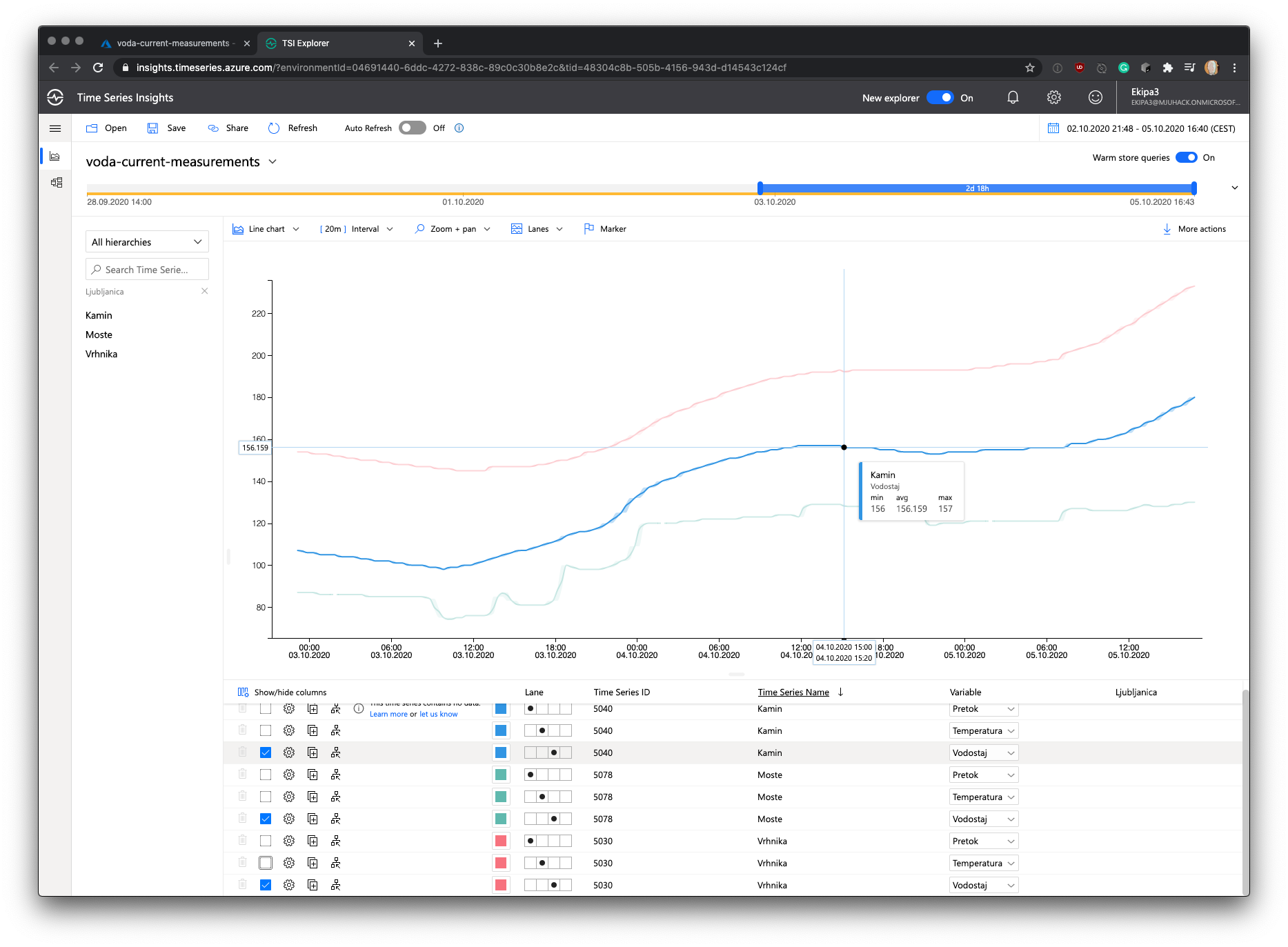 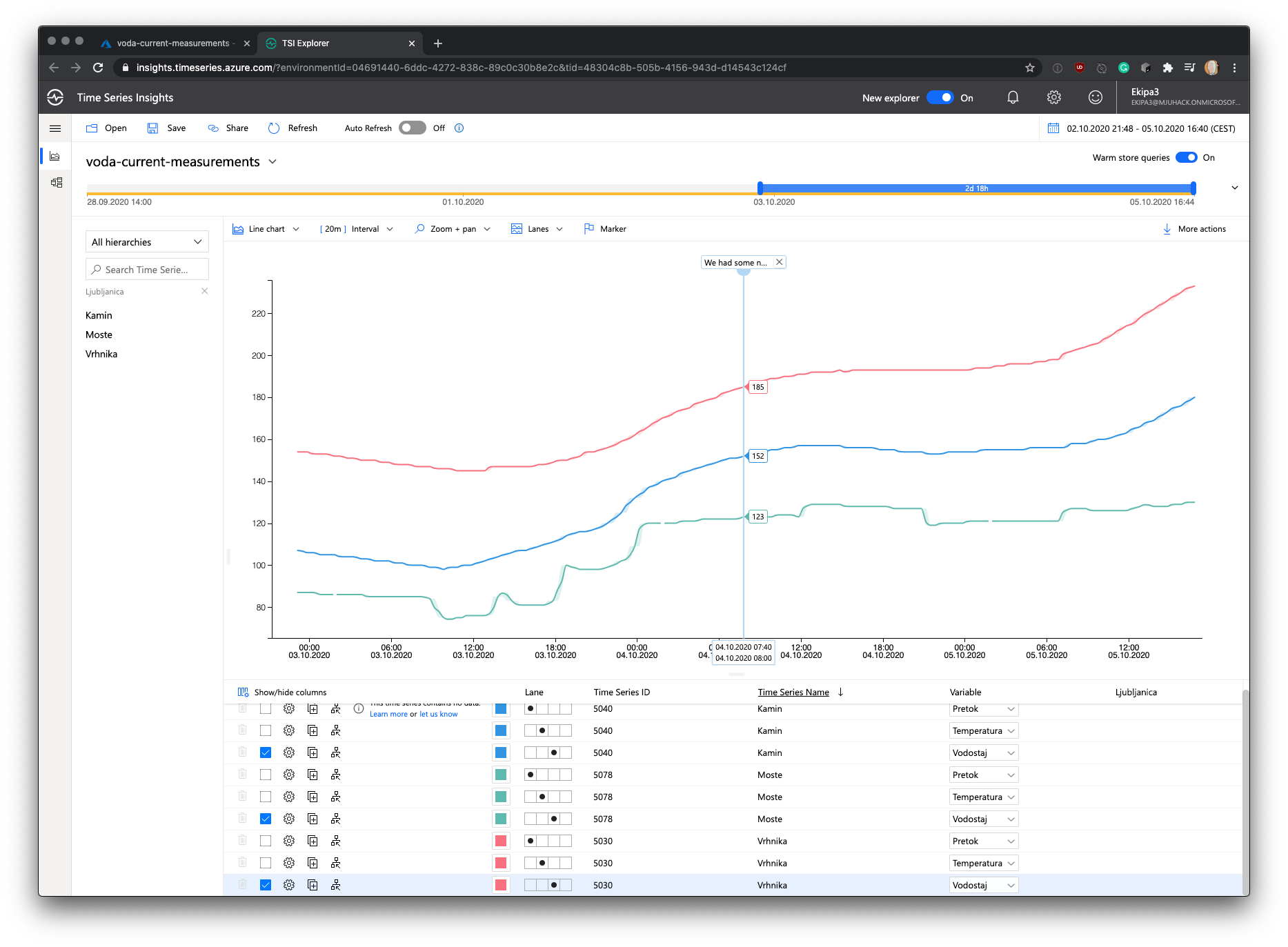 And some more stuff,..

I played around some more with streaming of events and transformation with Streaming Queries. So this also worked nicely; here a snippet if you want to transform JSON to “table rows” (SQL table) via Azure Streaming Analytics:

I then filled out all the needed forms that organisers needed and wanted. Described my idea, solution and uniqness of it in great detail. Submitted everything… And waited… Waited some more… Fell asleep…

The results came in.

This is the first time I’ve used Microsoft Azure. I’ve been running and building things on AWS, GCP, DigitialOcean, Hetzner, Heroku, … own metal, etc. for ages now. But I never gave Microsoft a chance. Perhaps I’m one of the “old guys” now that has been around when Microsoft was waaaaay less open if not hostile to Open Source movement. So I always take Microsoft with caution…

I was very very impressed by Azure. Things felt very enterprise-ready, very coherent; the UI was clean; I felt “home”. I did struggle a bit with “resource groups” - I still think that they are entirely unnecessary, and I did have some challenges with finding the right logs, and reporting tools inside Azure. I was impressed by how well Streaming Analytics was packaged inside the SQL Server setup. As in - “look, just set it up here… its easy”. That was some nice up-sell from the Azure team.

Another plus; I’ve discovered this after the hackathon was; Azure DevOps Services. You can quite trivially setup GitHub Actions, and CI/CD pipeline with DevOps services. Making the deployment even more accessible and even more friendly. Sidenote. Microsoft didn’t put a cap on accounts that we used for the event. That gave me free hands to explore “everything” that I could get my hands on. I need to admit that perhaps if I had a bit more time, I would explore more of their IoT offering and machine learning suite. That s*** also looks extremely well-integrated and “easy”.

P.s.s.: Give me some feedback if this kind or articles are interesting to you… or not? Below. 👇

P.s.s.s.: All the code from this hackathon are hosted on GitHub the project name is “voda”.